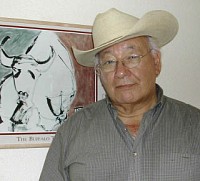 Navarre Scott Momaday was born in Lawton, Oklahoma and spent the first year of his life at his grandparents' home on the Kiowa Indian reservation, where his father was born and raised. When he was one year old, Scott's parents moved to Arizona. His father was a painter. His mother, who is of English and Cherokee descent, became an author of children's books. Both worked as teachers on Indian reservations when Scott was growing up, and the boy was exposed not only to the Kiowa traditions of his father's family but to the Navajo, Apache and Pueblo Indian cultures of the Southwest. Momaday early developed an interest in literature, especially poetry.

After graduation from the University of New Mexico, and a year of teaching on the Apache reservation at Jicarilla, Momaday won a poetry fellowship to the creative writing program at Stanford University. Under the guidance of poet and critic Yvor Winters, Momaday earned a doctorate in English literature in 1963, and accepted a teaching post at the University of California at Santa Barbara. As his doctoral dissertation, he edited and annotated the Complete works of the 19th century American poet Frederick Goddard Tuckerman. It was published by Oxford University Press in 1965.

In 1969, his first novel, House Made of Dawn was awarded the Pulitzer Prize for Fiction. Momaday moved to the University of California at Berkeley as Professor of English and Comparative Literature. He designed a graduate program of Indian Studies and taught a popular course in American Indian literature and mythology. His long study of the Kiowa oral tradition bore fruit that year in The Way to Rainy Mountain , a collection of Kiowa tales illustrated by his father Al Momaday. That same year, he was initiated into the Gourd Dance Society, the ancient fraternal organization of the Kiowas.

His 1971 essay "The American Land Ethic" drew public attention to the tradition of respect for nature practiced by the native peoples and its significance to modern American society in an era of environmental degradation. Angle of Geese and Other Poems was published in 1974, a memoir, The Names , in 1976. A second volume of poems, The Gourd Dancer (1976) was partly written while he was lecturing in Moscow in 1974. At the same time, he took up drawing and painting seriously for the first time in his life. Since then his work has been exhibited throughout the United States. His newer books are frequently illustrated with his own paintings and etchings.

As novelist, scholar, painter, printmaker and -- above all -- poet, Momaday's work has encompassed a panorama as wide as the western landscapes he celebrates. In Momaday's work and career, we see an extraordinary fusion of modern Anglo-American literary methods and classical prosody, with Native American traditions of poetry and story-telling. Through his novels, poems, plays, books of folk tales and memoirs, essays and speeches, he has won international respect, not only for himself, but for the Native traditions that inform his work. At the same time, he has helped to reacquaint the modern world with an ancient understanding of the intimate connection between humankind and the natural world.