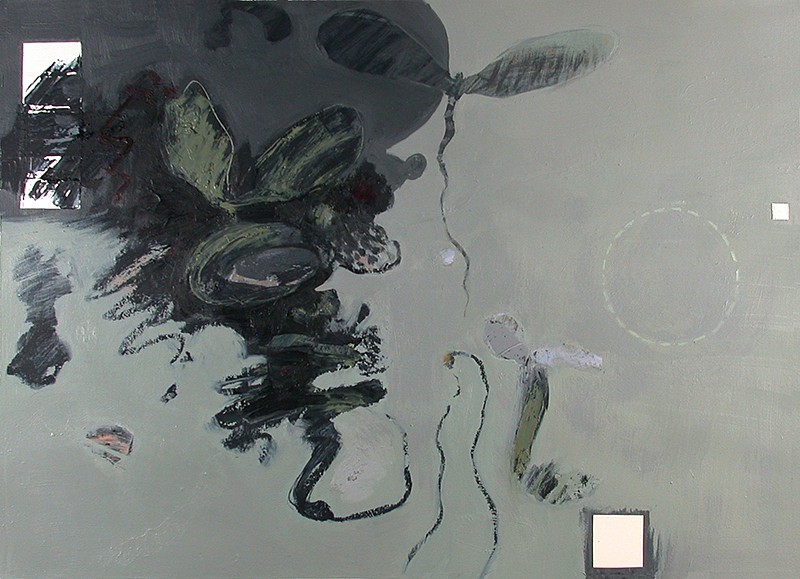 OKLAHOMA CITY, Oklahoma---JRB Art at The Elms presents works by Oklahoma artist and educator George Bogart, alongside works by several artists who were at one point Bogart’s students.  The exhibition opens with a reception from 6:00 to 10:00 pm on Friday, April 1st, 2016, during the Paseo’s First Friday Gallery Walk and continue through Sunday, May 1st.  Featured artists include George Bogart, BJ White, George Oswalt, Michele Mikesell, David Crismon, Joe Andoe, Linda Lou Warren, Caroline Farris, Larry Hefner, Jennifer Hustis, Betty Wood, Rick Barnes, and Sunni Mercer.  While the primary medium will be painting, the show will also include prints and sculpture, and will fill the entire gallery space at JRB Art at The Elms.

George Bogart was an imposing figure; tall, thick dark hair and a big black mustache but he turned out to be a gentle patient man and one of the best teachers I have known. George was a prolific, passionate painter that practiced his craft every day. He had a huge impact on me to develop a strong work ethic. I remember George telling me numerous times that “a lot of good soldiers had to die before you can win the battle.” This was his way of telling me to keep working. – Larry Hefner

George Bogart (1933-2005) was a brilliant artist and prodigious painter with an innate feel for color and space, as well as an exceptionally inspiring teacher.  His knowledge was so vast and his attitude so congenial, he would often accumulate a following of strangers during a museum visit, spending as much time as they asked giving answers and explanations as to the art on view.  He was always generous with his time and attention to his students, who remember him as someone who gave them confidence when needed, and always encouraged them to continue pursuit of their artistic education.  His legacy is seen today in the work of the many talented Oklahoman artists who studied with him at Oklahoma University.

“George made all the difference for me.  He seemed to know exactly how to motivate me.  Sometimes he played devil’s advocate, other times he encouraged, he challenged and he had relentless expectations…but no matter what teaching method George Bogart chose, his posture as a mentor was always to stand alongside.  I consider myself so fortunate to be able to say ‘George Bogart taught me to paint,’ and even more honored to say he was my friend.”  --Sunni Mercer

“For George Bogart, the supreme act of art was painting. He was of the heroic painting school of 1950's sensibility. The Abstract Expressionist’s abiding lesson that life was a series of choices that one had to make and be responsible for again and again.

George's lack of commercialism and his active process of painting was the message that was most inspirational to me. His paintings were honest investigations into the forms of expressionism. He was always growing in his practice till the end…some of his best work was the late work.”—George Oswalt

“Legacy” will showcase 13 oil on canvas paintings by George Bogart, including one figurative piece titled Teacher, as well as 10 of his smaller works on paper.  Michele Mikesell, David Crismon, George Oswalt, Joe Andoe, Caroline Farris, Larry Hefner, Linda Lou Warren, Rick Barnes, and BJ White present paintings displaying their individual styles, some made new for the occasion of this show, while Betty Wood’s monotype and Sunni Mercer’s sculptures provide counterpoints to the abstract paintings that were Bogart’s forte.  During the run of the show, the gallery will be posting remembrances and quotes from their time with George Bogart on our Facebook page, and encourage the public to reach out with their own memories and stories as well.  Thus, the show will be a celebration of George Bogart’s legacy in his own work, as well a display of the continued impact he has on the Oklahoma art scene today, as his words and teachings linger in the work of the artists he taught.

“I was late to the game since George had retired years before I arrived.  Fortunate for me, he still kept a studio out at OU Northbase where the graduate students painted. I wasn't a tuition paying student of his, but he not only took the time to share critical information with me about my work…he taught me by example.

At that time, I painted mainly in earth tones, and George challenged me to use colors I disliked.  He would often bring by a random tube of magenta pink or sea foam green.  After he left- his useful canvas, brushes and paints were redistributed out to other artists.  I had recently graduated and moved to Dallas and was unable to make a claim on anything.  Elyse Bogart contacted me after the sale and said she had saved George's hat and favorite brush for me.  She said I was also welcome to take the paint that was left after the sale.  I picked up George's green hat and an ancient liner brush taped to the end of a long handle, as well as a box of familiar purples, magenta pinks, and sea foam green paints. I still come across a random tube of George's paint and think how lucky I was to spend those times at OU Northbase with him.  What a treasure, I am so lucky to be part of his legacy.” –Michele Mikesell