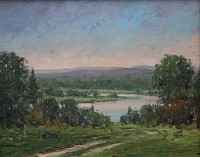 Using a traditional academic style Robert Schneider strives to capture the always-changing landscape. Schneider acknowledges the influence of painters of the past including George Inness, Thomas Cole and Fredrick Church as he creates new work in the style now referred to as new traditionalism.

Schneider studied drawing and painting with Frank Mason at the Art Students League of New York and in Mr. Mason's summer school in Stowe Vermont. His style reflects Mason's primary concerns, the illusion of subject matter in space and atmosphere, revealed through light. He has also studied with Richard Goetz, who is a founder of the Oklahoma Museum of Art, and a noted teacher of the fundamental principals of drawing, painting and composition stressing an approach to color based on the methods of the impressionists.

Schneider's work has been exhibited and collected internationally in private and public collections including, The Readers Digest Collection, the Aetna Insurance Company Collection, The Hartford Insurance Company, The Pfizer Pharmaceuticals Collection and the l.B.M. Collection. His work has been exhibited at many Art Institutions including; The National Arts Club, The Salmagundi Club, The Art Students League of New York, The Hudson River Museum of Yonkers N.Y. The Oklahoma Museum of Art and the Proctor Art Center, Bard College, Annandale on Hudson, New York.