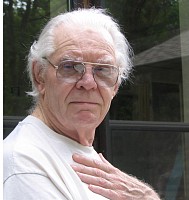 Dee J. (Pete) Lafon (1929-2011) was born in Ogden, Utah on April 23, 1929 to James Martin Lafon and Ruby Hansen Lafon.  As a young man, Lafon distinguished himself as a champion swimmer and was making a living as an artist at the age of 18. He was featured by Life Magazine as one of America’s top emerging artists in 1951. He received his B.F.A. (1960) and M.F.A. (1962) in painting and drawing from the University of Utah in Salt Lake City. He worked as an illustrator and taught painting and drawing before assuming the chairmanship of the Art Department at East Central University, Ada, OK in 1964. Following his retirement from that position in 1984, he established a studio in Norman and devoted himself to his artwork. He has served as the Visual Arts Director for the Oklahoma Arts Institute and a Guest Artist at Wichita State University in 1990.

Lafon has been the recipient of many honors and awards and in 1992 was recognized by the Governor of Oklahoma. He received the Lifetime Achievement Award from the Paseo Arts Association in 2007. He has presented his work in numerous solo and group exhibitions and his work has been acquired by many museums, galleries and public collections including the State Art Collections of Oklahoma and Utah, the University of North Carolina Art Museum, Springfield Art Museum, Oklahoma City Art Museum, Philbrook, Southwestern Bell Telephone, Conoco and Koch Industries. He has also completed various public commissions for Warner Brothers, the University of Oklahoma School of Dentistry, and the Ada Public Library, among others.